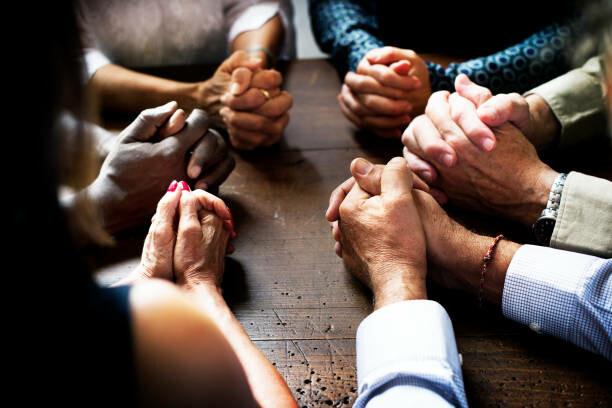 On March 13, my husband of 47 years died.  He had been battling COPD and congestive heart failure for a long time.  It was a blessing to be able to care for him at home the last three weeks of his life.  He was a Christian and I knew that even though “absent from the body,” he was “present with the Lord!”

The COVID 19 crisis was underway, so making funeral arrangements was quite challenging.  My great desire was to hold it at our church where we have been active members for many years, but that was not allowed.  We had a service at the funeral home on Thursday, March 20, one week after his death with only family members present.

The following Monday I became extremely sick.  My daughter took me to the Emergency Room at a nearby hospital where I was admitted with double pneumonia and the corona virus.  I lost consciousness at that point and did not wake up until a week late on a ventilator in ICU isolation.

When the initial treatment had not been effective, the doctor told my son and daughter that I needed to be put on a ventilator for three days -- and the likelihood of death was 50 - 95 per cent.  Since many others were dying of the virus in that hospital, my son and daughter knew only the Lord could save me.  A host of people were fervently praying – my immediate and extended family, church family, friends, Bible Study Fellowship group, even many who do not know me!

The medical staff had to keep me on the ventilator for five days.  Twice I recognized that I was inches away from death.  The first was while I was in a semi-comatose state on the ventilator.  As I felt death overtaking me, I pleaded with the Lord to keep me alive: “Please do not let my children lose both their parents within two weeks’ time!”

The second incident happened the day after I was taken off the ventilator.  I felt my body giving up again and screamed, “No, I am not going!” and once more, the Lord brought me back.  Without any doubt, I know it was God answering all the prayers for me that were being continually lifted before Him.  Unbelievable power is released when people pray!  After that, things began to gradually improve.

It was 21 days before the doctors felt I could safely be released from the hospital.  During that period, not only did I have a central line in my neck – but also six IV’s all over my body!  I lost 25 pounds!  It was an ordeal beyond imagination.  But my family kept gathering in circles and individually to pray for me!

During the period I was hospitalized, my daughter, son, and daughter-in-law all caught the corona virus.  Thanks be to God, none of them got real sick. Each of them felt weak for a couple of days and self-quarantined at home for two weeks.  Miraculously, none of my four grandchildren became ill with COVID 19.

I was released on Easter Sunday in a wheelchair because I was far too weak to walk.  When it was time to pray over our Easter dinner, someone said, “Who is going to pray?”  My husband had always been the one to do that at our family meals.  My son said, “I will!”  He expressed deep gratitude to Jesus Christ for dying on the cross and taking the punishment our sins deserve, for rising again in resurrection power, and for bringing me back from death’s door to the land of the living.  My heart was overflowing because his faith in the Lord had been resurrected when all the prayers for my life were answered.  Later that day, he sat my four grandchildren down and made sure that each one knows the true meaning of Easter.

Very slowly I am regaining some strength.  The Lord’s healing hand is upon me and I have put two pounds back on.  I am now able to get around a little with a walker or holding on to someone or something -- even though I quickly get out of breath.  Physical therapy is next on the agenda and I have faith that the Lord will eventually restore my ability to walk and live independently.

If you know anyone who does not believe in the power of prayer, please share my story with them!  I am living proof!  My brother-in-law was diagnosed with cancer of the kidney the day after we buried my husband.  Now our prayers are concentrating on him!

The Lord spared me for a purpose and I want to use the rest of my life to witness to people about salvation and the new life that is found in Jesus Christ -- and to help those who may have strayed to get back on track with our Lord!  He is my reason to live and I count each new day as a gift from Him!  Lord, You and You alone are worthy of all our honor, glory and praise!