In Every Tempest | Articles | The Fellowship 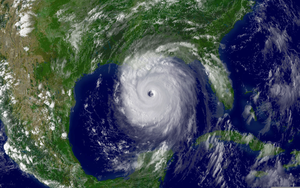 As I watched Hurricane Laura greatly intensify while barreling across the Gulf of Mexico with a beeline on Lake Charles, Louisiana, I was filled with dread.  A similar storm, Hurricane Audrey, struck Lake Charles many years ago when I was growing up there.  It was a disaster of death and destruction in which 416 lives were lost, many due to the 12 foot storm surge.  Lake Charles is only 13 feet above sea level, a mere 30 miles from the Gulf of Mexico and connected to it through a series of waterways and lakes.

Many were the horror stories from Hurricane Audrey.  People in its path climbed trees hoping not to be swept away -- only to find that water moccasins (snakes) and nutria (semi-aquatic rodents) also were seeking safety in the trees.  My father, who was a manager at one of the industrial plants in Lake Charles, volunteered to drive his company’s ambulance to pick up dead bodies.  The corpses were laid out in rows for relatives to hopefully identify.  It was horrific!

I was especially burdened about Hurricane Laura because my precious sister and brother-in-law, two of their grown daughters and families, and many members of their extended family live in Lake Charles.  All of them joined more than a million people who evacuated to other places with much higher elevations.

I was grateful when Pastor Brian sent out a call to prayer for the people in the path of the storm, and we asked The Fellowship Prayer Team to lift up my family members specifically.  Since it was almost the anniversary of Hurricane Harvey and the ravages of flooding are still fresh on my mind, I was very concerned about rising water from the storm.  My sister’s home and that of one of my nieces front on bayous.

As Laura approached land on the night of August 26, I was reading online about the storm precautions being taken.  One heartbreaking fact was that even though everyone close to the coast in SW Louisiana and SE Texas had been ordered to evacuate, a significant number could not because COVID 19 had robbed them of resources or they did not have relatives to take them in, etc.  One coastal sheriff begged his constituents who were riding out the storm to write down their name, address and Social Security number, seal it in a Ziploc bag and put it in their pocket for identification later.  The predicted storm surge was possibly 20 foot extending 40 miles inland and was classified at “unsurvivable.”  I begged the Lord to pour out mercy!

My sister’s youngest daughter lives in Florida and she could not sleep because of worrying about her parents’ home.  She got on her knees and prayed for two hours as the storm went ashore about 1 a.m. on August 27.  Having been taught from childhood to pray very specifically, she lifted their exact address many times before the Lord.   Laura landed as a Category 4 hurricane with wind gusts of 150 mph, the strongest recorded storm to hit Louisiana since 1856.  Radar showed the eye of the storm passing right over my sister’s home.

The wind damage in Lake Charles was devastating.  And every meteorological forecast was incredibly accurate – except for the storm surge!  One newscaster reported that the path of the storm took a little wiggle so that the worst of the surge went into the marshes.  Incredibly, the storm surge in Lake Charles was only several feet.  A boat house (owned by an extended family member) in the lake did not even flood -- but it has done so with every other major storm!

As we had so fervently prayed, not one of the homes of my family members flooded!  My sister’s home had some roof damage, but no interior leaks and no windows were broken.  There was some other minor damage and their heavy wooden playground equipment was picked up and moved a distance away.  However, just down the bayou from them, the storm totally lifted and blew away the roof from a neighboring house.  Right across from them, the top floor of a multi-story house was decimated.

In every tempest that we face in life, God is always at work performing miracles and we can  choose an “attitude of gratitude” to Him.  In the worst of circumstances, He never leaves or forsakes His children and shows us that His mercies never end.

The Lord is my strength and my shield;
my heart trusts in him, and I am helped.
Psalm 28:7

Would you like to help those whose lives have been impacted by Hurricane Laura like so many helped our community following Hurricane Harvey? The Fellowship is partnering with Katy Responds. A trailer, located in the The Fellowship’s east parking lot, is being loaded with needed supplies. Each time it fills up, the trailer is driven to the storm area and an empty trailer takes its place. Through September 14, collections are being received from 9:00 a.m. - 5:00 p.m. (Monday – Saturday) and 1:00 - 5 p.m. (Sunday). Volunteers are needed to staff the trailer and monetary donations are also welcomed. A list of needed supplies and other information can be accessed: https://tinyurl.com/y2954chv