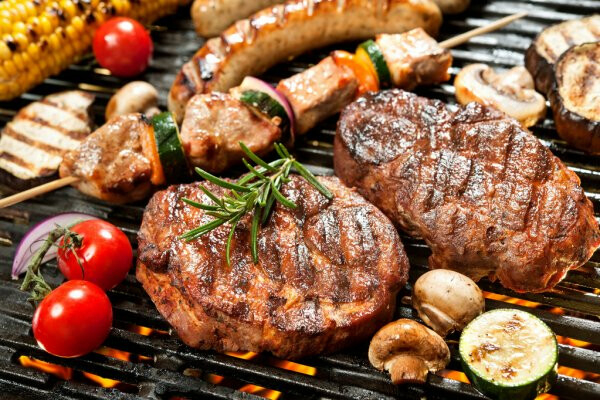 A few weeks ago on our eldest son’s birthday, we planned a special dinner that would include his girlfriend and grandparents. My assignment was to smoke the meat – a rack of ribs and a beef Tri-Tip roast. There is nothing like the smell of meat slow-cooked all day in a smoker.

I could hardly wait for the first taste of that Tri -Tip, but ate my salad and a bit of side dishes first – prolonging the anticipation of the meat. When I was fully primed for my first bite of meat, the piece I started on was rather large. Since I saw no knife at hand (and in too big a hurry to get one), I tried cutting it with my fork ... but that was slowing me down. I wanted to rip it with my teeth, but that would have been impolite. So I just shoved it in my mouth, chewed it a few times (not nearly enough) ... and swallowed. Within seconds, I realized it was stuck in my esophagus. Really stuck!

Excusing myself, I left the table to try to get it moving. Surely I just needed to wash it down, right?  But the liquids came bounding right back up. Raising my arms, doing contortions with my upper body, even jumping up and down would not dislodge the meat. Thank goodness it got stuck below my airways or I would have been gasping for breath!

My wife knew something was wrong!  Since I was breathing, I asked her to hang out with our family and enjoy the celebration. I just knew the problem would take care of itself and was determined to carry on as usual despite the great discomfort. That included going to bed like always, but I never got more than a couple of hours of very fitful sleep. After 4:30 a.m., I knew there would be no more rest that night for me.

About 6:00 a.m., I went into another room (where I would not disturb my wife) and called the 24-hour nurse line provided by our medical insurance. After I described the situation and answered a lot of questions, the nurse said I needed to go to an Emergency Room. That was the last thing I wanted to hear. Why not wait and see a doctor later in the morning? But she was adamant!

I woke my wife to tell her I was heading to the ER and there was no point in her coming as she would not be allowed in because of COVID 19. Driving to the ER, I was really asking God to help me ... and He did. The first answer came when there was no one waiting to be seen at 6:45 a.m. and there was only one empty bed that was available for me!

I was given some medicine that was supposed to relax things and move the obstructing food to the stomach where it belonged -- but that did not work. A gastro specialist was called and a procedure was scheduled for noon.

I texted Pastor Jerry to let him know what was happening, and he suggested getting out a prayer request for me. My first thought was that I did not want everyone to know about my poor judgment, but quickly realized, I needed the Lord’s help in every way!

Thank goodness the surgical team put me out! I really did not wish to know anything that was going on because plans called for intubation – a tube put down my throat into my airways with a machine breathing for me. This was to prevent any of the food they would dislodge from getting into my lungs and causing aspiration.

The medical team had to make three attempts before they were able to completely rid my esophagus of the food. The liquids with which I had tried to wash it down had caused much swelling. But with God’s help, everything got opened up again!

Unbelievably, I was home by 3:30 that afternoon.  I had a sore throat, heartburn and hoarseness for a few days, but that soon passed. I am so thankful for all the ways God answered prayers and paved the way for me to be successfully treated, and especially for preventing any breathing problems, which could have resulted in a much graver situation.