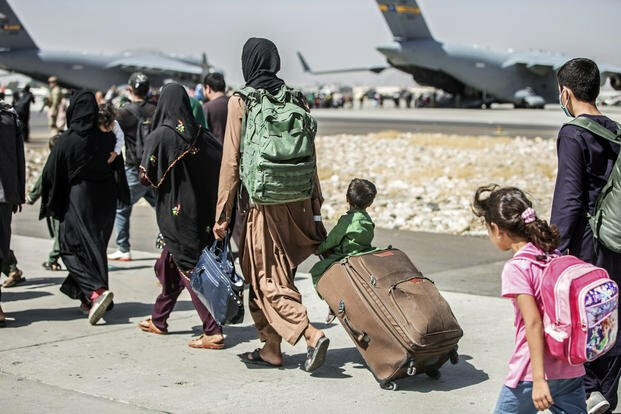 An amazing story of answered prayer was featured on Tuesday, September 7 on the Focus on the Family daily broadcast.  It was an interview with a Marine veteran, Chad Robichaux, who was instrumental in a recent effort (independent of the U.S. government) to get almost 12,000 Americans, interpreters, Christians, women and children (including 3,000 orphans) out of Afghanistan.  While millions of Christians worldwide were praying, Chad tells how God orchestrated the saving of so many lives:

“While serving in Marine Special Forces during eight tours of duty in Afghanistan, I was part of the Advanced Forces Operations and lived with Afghan families, getting to know them intimately and also their culture.  When I recently learned that the U.S. government had turned over the evacuation of Americans and key Afghan supporters to the State Department, deciding the Department of Defense was too emotionally involved, I felt called by God to help my many Afghan friends and others get to safety. They were targets for having supported Americans, our allies and/or the Afghan National Army.

“It was being reported that all these targeted Afghans had to do was get to Bagram Air Base.  However, the perimeter of the base was totally controlled by the Taliban, so reaching Bagram was not possible for them!  There was one particular Afghani who had been incredibly helpful to me and our military.  For six years I have been trying unsuccessfully to get a special immigration visa to the United States for him and his family.  Something needed to be done at once for them and many others like them.

“Having founded an organization, Mighty Oaks, to help veterans with PTSD, I had many contacts with other veterans and organizations. I began making contacts about orchestrating a rescue operation, and a coalition was formed to evacuate those in Afghanistan who worked side-by-side with U.S. Armed Forces.  Resources were quickly accumulated, and the support was gained of the United Arab Emirates with their huge humanitarian center, aircraft, airfield, and military.

“Most of the leadership of this rescue operation are Christians.  Our prayers and those of countless Christians throughout the world were ongoing.  Returning to the Middle East to help facilitate the evacuation was a huge challenge for me.  When I had left Dubai some years ago, I was suffering with PTSD in the form of horrendous panic attacks.  The way God protected me as I returned was incredible.  For eight days, I was on the ground in the Middle East working nonstop and able to get only one or two hours of sleep a night.  The opportunity to get people out was closing fast.

“In awe, we watched as God orchestrated what none of us could do.  It was success beyond imagination to be able to get so many out in such a short period of time!  What He did for me personally was as miraculous as the thousands we got to safety.  I did not have anxiety or stress, functioned at a high level despite almost no sleep, and was able to use all the experience and skills I had acquired in Afghanistan.  God spared me the entire time, and He spared all the thousands we got out.  No one on the rescue teams got hurt!  Our on-the-ground Task Force 6:8 received its name from Isaiah 6:8 – “Here am I.  Send me.”

“Then the window of opportunity closed! Some Afghanis, the bravest of all, remained behind, sacrificing their seats to freedom so others could be saved.  Genocide is now happening at its most grotesque level, including crucifixion, and being burned alive.  Because there are many who have converted to Christianity in Afghanistan due to widespread missionary endeavors, they are identified as Christians on their ID cards.  The Taliban is also going door to door, searching for Bibles and Bible apps on phones and immediately executing people.”

Please continue to pray for God’s supernatural protection over Christians and those who support the United States and its allies in Afghanistan – and for our Lord to orchestrate other covert rescue operations as successful as this one that has astounded the world!

He will rescue them from oppression and violence,
for precious is their blood in his sight.
Psalm 72:14

To access the broadcast that is the basis for this story, go to www.focusonthefamily.com.
Then choose Daily Broadcast, Past Episodes, then Rescue in Afghanistan: A Veteran’s Story.