No Way to Explain It | Articles | The Fellowship
BE THE HANDS AND FEET OF CHRIST AT SERVEFEST 2022 - REGISTER TODAY!

No Way to Explain It 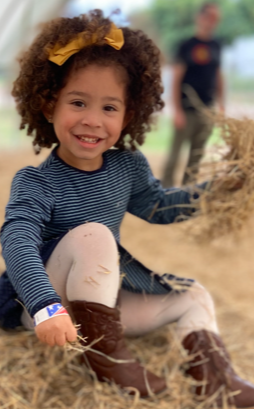 On November 11, 2017, we welcomed a beautiful baby girl into our family. She was four weeks early after an uneventful pregnancy and a delivery that went very smoothly. Scarlette Jean was perfect!

The day we were scheduled to be discharged from the hospital, the pediatrician came in to check Scarlette and heard a loud murmur in her heart. Our departure was delayed so that Scarlette could have an ECHO of her heart. It revealed a large hole in her heart (perimembranous ventricular septal defect -- VSD). There are two types of VSD’s -- one is in the muscles, which tends to heal on its own without intervention; the other type is in the membrane and usually requires surgical intervention for closure, which is what Scarlette had. We were discharged facing multiple follow-up appointments with cardiology.

So many times as we began bringing our new baby girl to church, I hit the floor on my knees praying and crying out to God: “Please heal our baby girl!” And singing, “This is how I fight my battles,” over and over and over because there was nothing I could do to fix our girl’s heart. Every week we submitted our prayer request for healing of Scarlette’s heart to The Fellowship Prayer Team, who faithfully joined us in our pleas to the Lord.

At two months, Scarlette was diagnosed with heart failure and placed on medication. She continued to grow and thrive -- despite the large hole in her heart.

A month later, Scarlette had another ECHO of her heart which showed that the VSD was making no progress in closing on its own. It also showed another problem of greater concern -- the hole was very close to one of her heart valves! The doctors were afraid that the valve might try to open up to attempt to close the hole. Miraculously, since Scarlette continued to grow, thrive and meet all milestones of an infant her age, the doctors decided to continue to watch her and not yet proceed with any surgical intervention.

When our baby girl was one-year-old, we went in for our next scheduled ECHO. All of the nurses were laughing and loving on our sweet Scarlette while saying, “She is the fattest cardiac baby we have!” This ECHO yet again showed no signs of the VSD closing on its own. However, our doctor was in shock because of how big Scarlette had grown, and how well she was thriving. Her ECHO and EKG showed that she was no longer in heart failure and we were able to take her off all medication!

But the doctor did say, “Because the VSD has not closed on its own by now as expected, it more than likely will not.” However, since Scarlette was growing and thriving so amazingly, the decision was made to put off surgical intervention yet again! The doctor would continue to keep a close eye on her, but let her grow some more prior to surgery. As long as Scarlette continued to have no signs of heart failure or distress, our doctor said we could wait another year before the next ECHO.

Fast forward to Scarlette’s second birthday ... She had grown into a little beauty that lights up any room with her beautiful smile and energetic laugh. Nine months ago on February 18, Scarlette had her scheduled ECHO. The technician performing this ECHO seemed to be struggling! She would leave the room mid-scan to go speak with the doctor and then come back to take some more videos. This happened multiple times. Were my worst fears coming true? Had her VSD gotten worse? Did the valve open up, attempting to close the hole -- meaning that not only would she need the VSD repair, but also a valve replacement? Was my beautiful baby girl back in heart failure? The only thing I could do was hold my two-year-old and cry out to our Lord, “PLEASE HEAL MY BABY!”

Waiting for the doctor to come in was the longest 20 minutes of my life! There were tears in her eyes as she entered the room and said, “There is no way to explain what has happened. The VSD has completely closed and Scarlette has a perfectly normal ECHO!”

Our God is the ultimate healer and the Great Physician! On the edge of my Bible pages, I have written in big bold letters, “THIS IS HOW I FIGHT MY BATTLES!”

What are we most grateful for this Thanksgiving? Miracles still happen because our Lord of never-ending love hears and answers our prayers!

I prayed for this child, and the Lord has granted me what I asked of him.
1 Samuel 1:27