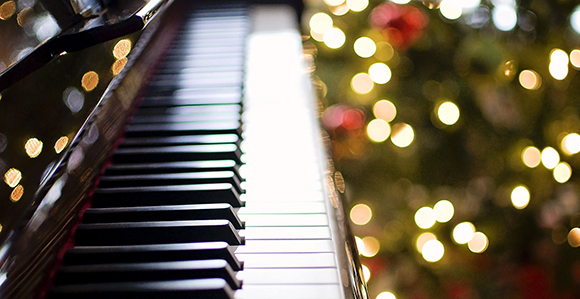 It was about 4 p.m. on December 24 some years ago in Van Horne, Iowa, and I had not played the piano all day!  That was really bothering me because it was Christmas Eve, and I had a burning desire to express my joyful Christmas feelings through music!

I had played carols on the piano every year since I first took lessons in the third grade.  But now my parents had moved to a smaller home after their children were grown, and the piano did not come with them. Music is such an integral part of my life, so I had my books of carols with me for this Christmas visit. I asked my mom if she thought the church would be open -- because I really wanted to play some Christmas music.

She discouraged me and said, “I am sure the church is all locked up. Besides, it is freezing cold outside with snow drifts everywhere.  You should just stay home with your family!”

But something inside me would not let go of the desire. (When I set my mind on something, it can be difficult to stop me!) So, I called the parsonage to see if getting into the church would be possible. The minister’s wife answered and said, “Yes, my husband is in the sanctuary setting up for the Christmas Eve service this evening.”

Having grown up in Iowa winters, I decided to walk to see if I could still stand the bitter cold (negative 20o)!  It was more challenging than I had anticipated.  Thank goodness, it was only about five blocks away!

What a relief to walk into the warm church. I asked the minister if my playing the piano for a while would bother him. He responded, “Not at all.” This was the church I had attended all the years of my childhood and memories came flooding back.

My spirits were soaring as I began playing all my favorite Christmas carols.  I took in the beauty of the stained-glass windows that had always spoken to me as a young girl. In the center window was Jesus knocking at the door.  On one side an angel was protecting a young girl and boy, and on the other side, Jesus was praying in the Garden of Gethsemane.

I thought of all the children’s Christmas pageants through the years that were always performed on Christmas Eve. What excitement they had brought and what fun!

I was lost in my own world when I became aware that the pastor had walked over.  We had not met before that afternoon, and he had a strange look on his face.  “We have a big problem,” he said.  “I have just had a call from Diane, our church organist.  She has the flu and cannot be here for our service tonight.  Could you possibly play for us?”

“It would be an honor to do that,” I replied. Though having also learned to play the organ in that church, I was a bit out of practice on that instrument.  I got right to work and planned a prelude on the piano and went over the hymns that had been selected for the service.

A little while later, I asked: “Would you like a little harp music in addition to the piano?” He replied, “A harp? … like the angels play?  You have one with you?”

I explained that my 13-year-old daughter had a small folk harp which she brought to play for her grandma … and she had some Christmas songs already prepared.

God wanted music at that church on Christmas Eve, so He made it happen. No wonder I could not ignore the desire to express my joy through music!

I played the piano, and my daughter played her harp while the congregation raised their voices in song. We were honoring the Christ child who left the glories of heaven to live a humble life on earth and redeem us from our sins.

I think it meant a lot to my mother for her daughter and granddaughter to honor our Lord in this way. It meant the world to us to be the answer to one minister’s prayers!  To this day, it still shines as one of my favorite Christmas memories!

My heart is steadfast, O God;
I will sing and make music with all my soul.
Psalm 108:1